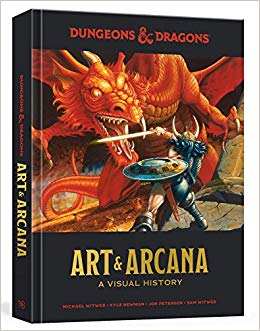 Carlson and his group of players play the game differently than traditional players.

Players usually have strict rules and cross reference everything in the books. Part of the game requires that you have a Dungeon Master and he creates the world and the rules; when his group plays, for example, Carlson will jump and do a triple axle before cleaving an enemy and his dungeon master is all for that because it’s fun and awesome. Traditionally he’d have to roll to be able to do that but they aren’t super strict about rules. Carlson says they’ve never played a proper game of dungeons and dragons in their lives — it’s their own game when they play.

His favorite part of playing the game is personifying a character’s flaws. The point of the game is to tell a story. He spoke about how all nerds and comic book fans know the best characters are the ones who have arisen from a big problem. He said he isn’t a big fan of Batman, but in the Batman comics all of the characters have a backstory that makes them unique and evil, but also relatable. Carlson allows a bit of himself to leak into his characters; he mostly plays Clerics or rangers.

Before I concluded our interview I asked Carlson for some advice on starting a game of Dungeons and Dragons. I was mostly asking for me but it could benefit any of you who may want to play. He says that making your background might be the hardest part because you want it to be good for your character. You shouldn’t make it too serious, and it should also make sense. He says you don’t have to play the game the exact way the book says. You’re creating a story of your own while playing to make it your own.