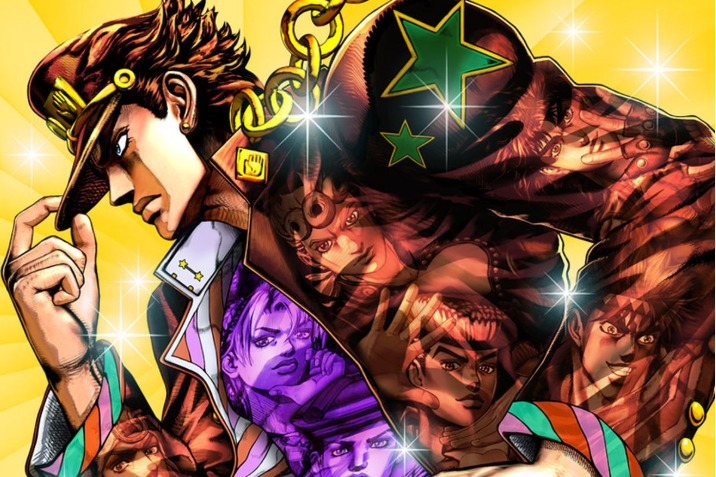 JoJo’s Bizarre Adventure is a Japanese animated series about a bloodline known as the Joestar family created by Hirohiko Araki. The series heavily references many classic rock artists such as Pink Floyd, The Rolling Stones, and The Beatles. The series is separated into parts, five of the parts being completely animated, two parts being completed as manga/comics (hopefully soon to be animated as well), and one part currently being drawn and written. Each part skips through a certain number of years, with a new “JoJo” and occasionally some returning characters (if they survive). I will keep spoilers at a limit for this review and put warnings over pieces of the review I don’t know how to say without spoiling something.

Part 1 – Phantom Blood This part is hard not to spoil anything for but it is the shortest part of the series and only includes 9 episodes. Though this part is very important to understanding the rest of the story’s plot, it’s by far the most boring. To put it in a simple manner, the Joestar family adopt a boy, Dio Brando, after his father died. Dio Brando is favored over the first JoJo, Johnathan Joestar. Dio Brando plans to make JoJo’s life a living nightmare and later in life to kill JoJo and his father to take their fortune. Spoiler alert, Dio becomes a vampire by the 3rd episode and is now hungry for more than just the Joestar fortune. The part took me a month to finish because I was so bored so I’m just going to say how it ends here: Jonathan decapitates Dio and Dio lives as just a decapitated head in a jar (I don’t know either he’s a vampire I guess). Jonathan gets married and goes on a honeymoon with his wife on a ship off to America. Surprise, Dio is on the ship and ends up killing Johnathan and taking over his body.

Part 2 – Battle Tendency This part takes place 50 years after the events of Part 1, with the protagonist being the grandson of Johnathan Joestar, named Joseph. Looks wise he’s the same as Johnathan but their personalities are the complete opposite. The characters in this part made it a lot more interesting and way easier to watch. Everyone from the villains to the side characters that might only show up three times really kept me motivated to get to the rest of the show. The soundtrack for Part 2 was very dubstep and electronic which was a little weird for a show taking place in 1939 but nonetheless it was far more interesting than Phantom Blood.

Part 3 – Stardust Crusaders (Includes spoilers for parts 1 & 2) The main protagonist for this part is Jotaro Kujo, grandson of Joseph Joestar. This part takes place 50 years later. Dio’s coffin is pulled out of the ocean and we find out he is alive and has taken Johnathan’s body as his own. This placed a curse in the entirety of the Joestar bloodline and awakes their “stands”. I’m not even going to go into too much detail about “stands”, all I will say is that they are somewhat like a spirit manifestation of oneself, each with their own abilities that match something to do with their users. The group of characters for this part have 50 days to defeat DIO before the curse kills Jotaro’s mother. In these 50 days, they travel the world and try to avoid DIO’s followers who were all out to kill them. The part goes over many different cultures and people. There was an art style change but it took me a little while to notice, it wasn’t as drastic as the shift in parts 4 and 5.

Part 4 – Diamond Is Unbreakable (Includes small spoilers for part 3) This part takes place 10 years after the events of part 3 in a small town in Japan called Morioh. The protagonist, Josuke Higashikata, is the 16-year-old son of Joseph Joestar and uncle of Jotaro Kujo. The art style for Diamond Is Unbreakable is one of my favorites out of JoJo’s, though it is a bit odd seeing older characters from previous parts in it. The art is a lot cleaner and bright with cool color tones. If you enjoy slice of life shows or murder mysteries you’ll enjoy this part. Over all, the part was great but I don’t have much to say about it, as I’m just not a fan of slice of life anime and ended up only really enjoying two of the characters.

Part 5 – Vento Aureo/Golden Wind (Includes minor spoilers for part 3) In the time DIO was alive, he had several children. This part is about one of those offspring, Giorno Giovanna. Though he is DIO’s son, he comes from Johnathan’s body therefore still giving him the Joestar birthmark and blood. Giorno has a “dream” (as he likes to put it) to restore virtue to the corrupt Italian mafia, who’s been secretly contributing to the drug trade they were supposed to be against.  Golden Wind had my favorite of the soundtracks and in my opinion some of the best characters that have been animated so far. One thing I found a bit odd about Golden Wind was the character Bruno acting more like the main character of the part than Giorno up until later on in the show. The story is a bit more serious compared to the last one, but still had some comedic relief which I enjoyed. The art and animation is very pretty but I have some complaints about it as well such as almost everyone has the same exact nose, mouth, and eyes. There are a lot of animation errors in around three or four episodes but I believe that they will be fixed once the blu-ray release is out, as that is what they did for part 4. Part 5 was my favorite of the series and I am ready to see more of the series animated one day.

I give the entire show between a 7.5 and an 8 out of 10. If you enjoy animation, various art styles, and older music you might also enjoy this. Be sure not to skip parts or intros to get the full experience. 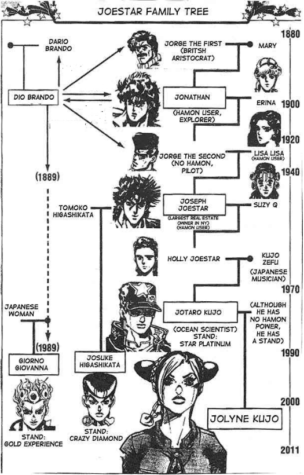